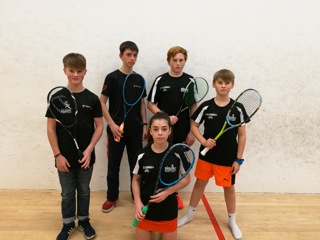 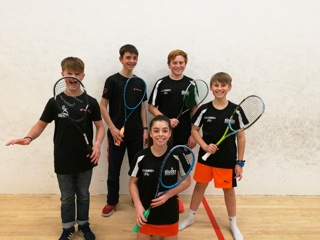 Here is a quick synopsis of the Boys U15’s exploits in Chippenham, Wiltshire.

What a Girl! I hear you say, in a boys team! That is actually allowed now. For us this was a last minute decision on hearing that a number of the other counties were bringing 6 players, missing in the picture was Craig Goldsmith, who left earlier.

Our first match was against the home side Wiltshire, which we thought we would have a good chance against. David (Back row right) and Craig went on first, Craig battled hard but lost 0-3, and David won the first game and lost the second, so at 1-1 we really did need him to come through! It went on to become 2-2, with eventually David snatching us our first match, making it now 1-1 all! Noah (middle left) then went on but failed to get to grips with his opponent, going down 0-3! Now 1-2 down in matches , whoops! James (middle right) went on at string 2, knowing now that he had to win. James rose to the occasion, by playing some good squash and reversing his brother’s loss to win 3-0! So Luca (Back Left) had to go on to seal the deal, which he did emphatically, 3-0!
One county beaten 2 to go!!

Our next match was Cornwall, who in stage 1 gave us a good drumming!! Could we do any better this time? I decided to bring in our secret weapon Amy! Amy played at 2 so pushing everyone else down the order!
David now at 5 went on and had another massive match, getting it 2-2 again! But this time failed to convert it, but so close!! Amy had been put in at the deep end, and even though had some fantastic and entertaining rallies went down 0-3, and unfortunately so did Noah and James! left to Luca now to put to right his loss last time to the British U13’s no. 3 Jack Mahon. The pressure was on, but his preparation was good enough this time, beating Jack comfortably 3-0. So a Loss to Cornwall 1-4.

Our last match was against Glos who had a very strong side so it was damage limitation time! There were no surprises at nobody gaining a game but fighting hard! Luca’s turn though, was he really playing any better? To play another Jack who is ranked 8 in the county and who Luca had never even got a game off! Luca lost the first game 4-11, just not tight enough. 2nd game Luca was up 10-7, surely he could register his first game against Jack, but failed to score another point losing 10-12, but now he knew he could push him, so 3rd game, same scenario with Luca back at 10-7, but this time he converted it 11-9!! And then amazingly got the 4th as well, game on!! The 5th again was very close and Luca knew that Jack was also very tired and at 7-7 could swing anyway, but Luca put 3 drops down at this crucial point, which had been so effective and the match slipped away!! But what a performance, a corner turned, well played Luca!!

Player of the day went to both Luca C-W and David Offer, could not split them, both did tremendously well!!