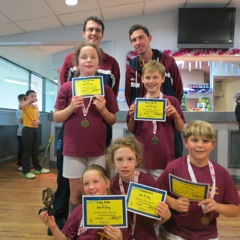 During Stage 1 Somerford Primary and Burton Primary competed against each other (Highcliffe St Mark’s were unfortunately unable to bring a team). Burton were the winners and hence earnt their place to compete against the seeded schools The Priory, Mudeford and Christchurch Juniors at the finals on 3rd Dec.

This finals day was a great event with over 30 matches being played and was well supported by excited parents and staff.

The overall winners were the Priory, who were the odds on favourites to win due to having some county players within their team. However all those who took part, 3 boys and 3 girls from each school, some playing squash for the first time on a squash court, competed with enthusiasm and great gamesmanship.

Everyone received a certificate for taking part and the winners were delighted with their individual medals and a trophy for their school.

Runners up were Mudeford Junior School, followed closely by Christchurch Juniors and Burton.

The event was organised by Charlie Campbell-Wynter, Head Squash Coach at Two Riversmeet – for more info on squash contact Charlie on 07952 912732.