A squash fest of champions saw junior players from six to 17 battling it out for honours with top teens from Jersey and Dorset making finals in the older age groups, while two families made their marks among the pre-teens.

Almost 60 young players from Dorset and Jersey competed in the 2015 Dorset Junior County Closed Squash Championships hosted by the West Hants Club, Bournemouth on September 12 and 13.

West Hants players, Phil Sargeant, 17, and Abigail Hurd, 15, both beat Jersey opponents Callum Cunningham and Beth Garton in the finals of the U19 Boys and U17 Girls competitions.

Beth Garton, who had been runner-up in the U17 Girls final, became U15 champion by beating Maia Pannell, 12, in a closely contested five-setter. Maia fought back from 0-2 down, to level the match before losing 6-11 in the final game.

However, both Maia and her younger brother Joe, 10, who train at Virgin Active in Poole, finished the competition as champions in their own age groups, as did brothers and sisters from another Dorset family, the Campbell-Wynters from Two Riversmeet in Christchurch. Maia beat Amy Campbell-Wynter, 10, in the U13 final, while Amy became U11 champion after beating Amelie Turpin of Jersey.

Amy’s older brother Luca won both the U13 and U15 categories without dropping a game against Joe Pannell and Michael Rides of the West Hants. Joe won the U11 final beating Luca’s younger brother, James Campbell-Wynter.

The competition was sponsored by Slades and Harrow and the prizes were presented by Mike Hopkins, a squash coach from Fort Regent.  The competition was organised by Bev Vatcher, Dorset’s Junior Squash Manager and Development Officer, who was impressed by the standard of play and sportsmanship. “We are really keen to attract more young players and so if they want to get fit, they should come down to one of our clubs and have a hit,” said Bev. 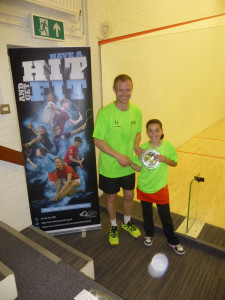 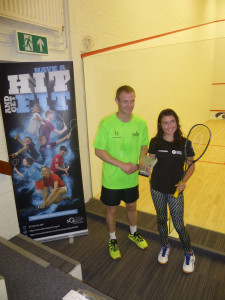 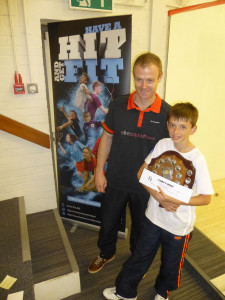 Mike Hopkins, Luca Campbell- Wynter U13 and U15 Winner 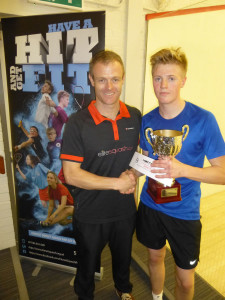